Hello there, well it has been a while and my promise to myself that I will write a blog twice a week never seems to work out. I do want to write about the last trip as it was amazing, fun, interesting and a very different trip to my others. I found a sweet place just minutes from Arles, surrounded by an olive grove and acres of freshly cut hay. Ponies in the fields and a view way over to the Alpilles. Apart from a few too many flies it was idyllic. I have taught in and around Roussillon I have taught in the Camargue and this trip was a mixture of many locations. The olive grove and garden sung happily to the sway of the poppies, the hush of the breeze teasing the leaves and the songs of the birds feasting on the ripened fruit of the ancient and laden mulberry tree. There was no question that our first day should be spent in the garden practising tecniques and painting poppies.

Just a few of our poppies.

Being so close to Arles it would have been foolish not to go the Van Gogh foundation and stand on the walled banks of the Rhone river and indeed stroll along to the Roman Arena still mostly intact.

I wasn’t over impressed with the art on display at the foundation and having been to the Van Gogh museum in Amsterdam there was an under whelming display of Vincent’s work. My favourite little piece hanging there was the one below. 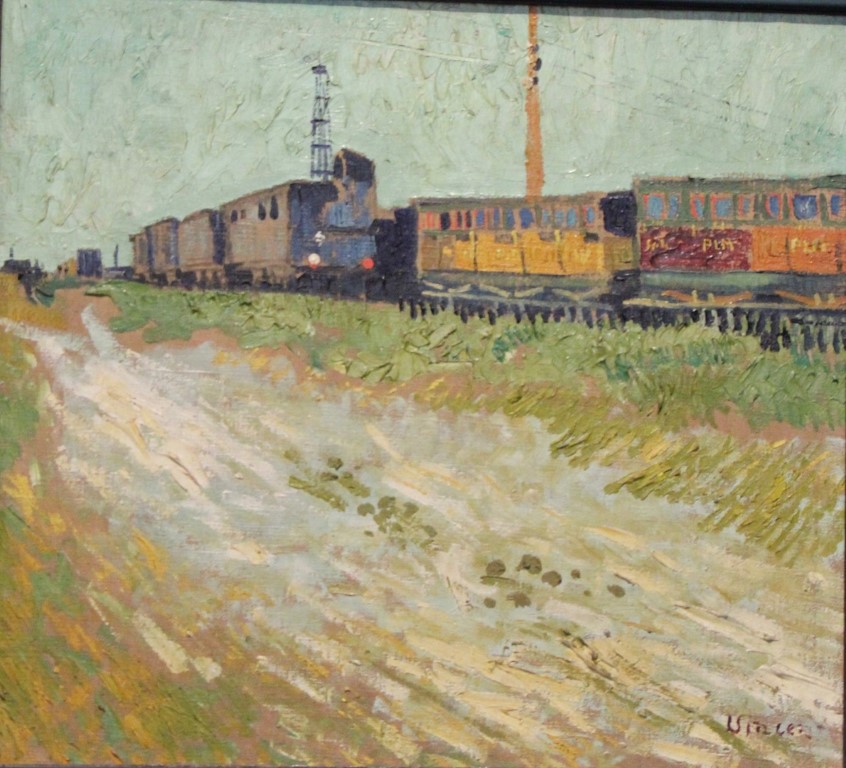 I love it, it is so different from his other work and I am not sure why I found it so moving but I do. Something about trains, trains especially older trains seem to have so much character. They seem to know so much and yet it is hard to tell why. They seem so happy when they are roaring through country and towns. They have such a folorn expression when left alone for too long or simply forgotton. They just wait patiently for someone to come and make them roar again.

Back to the exhibition. UM. There were a few rather dreadful Picasso paintings, I think Picasso would have faired better had they not put any up at all. Then many many Paul Nash paintings all of which I would be happy never to see again. But. Sigmar Polke. Whose work I knew vaguely caught my attenetion and I loved what I saw, so much so I bought a rather huge book on his life and work. Really very interesting, playful, diverse.  Using every media I know of and loads I don’t. A joyful madness. Described as ‘One of the most ferociously experimental and influential artists of the post war period” ..’His irreverant wit and his promiscuous intelligence underlay punishing critiques of the conventions of art history and social behaviour’. I would like to see more of his paintings, the real ones of course. As we went around the exhibition each one of us liked different artists and different paintings and no one but me liked Polke, So it just goes to show, beauty is of course in the eye of the beholder.

The blue one, untitled, I think reminds me of Orpheus in the Underworld.

Gosh it seems I am still in Arles and it is time to make dinner. I will write part two after supper.